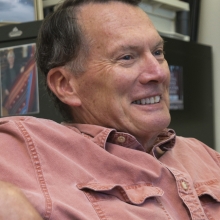 My primary work these days is associated with the Pacific Northwest 2100 Project.  This Project addresses the three overarching policy realities that will challenge natural resource and environmental agencies in the Pacific Northwest through this century:  (1) the likely dramatic increase in the numbers of humans inhabiting Washington, Oregon, Idaho, and British Columbia;  (2) a dramatically different climate which will impose different ecological constraints;  and (3) the ongoing and intensifying collective demand for ecosystem services.  Each of these three policy factors is critical in driving future ecological changes and each is inextricably intertwined.

Throughout California, Oregon, Washington, Idaho, and southern British Columbia, wild salmon runs have declined and many have disappeared.  The goal of the Salmon 2100 Project is to improve the quality and utility of assessments of the ecological consequences of options to restore wild salmon.  It involves close collaboration with policy analysts, policy makers, policy advocates, and fisheries scientists in many organizations to develop long-term and broad-scale forecasts that are both policy relevant and scientifically credible.  The hallmark of this effort is not to advocate for any specific policy choice, but rather to present the various policy options and an assessment of the probability of success of each.